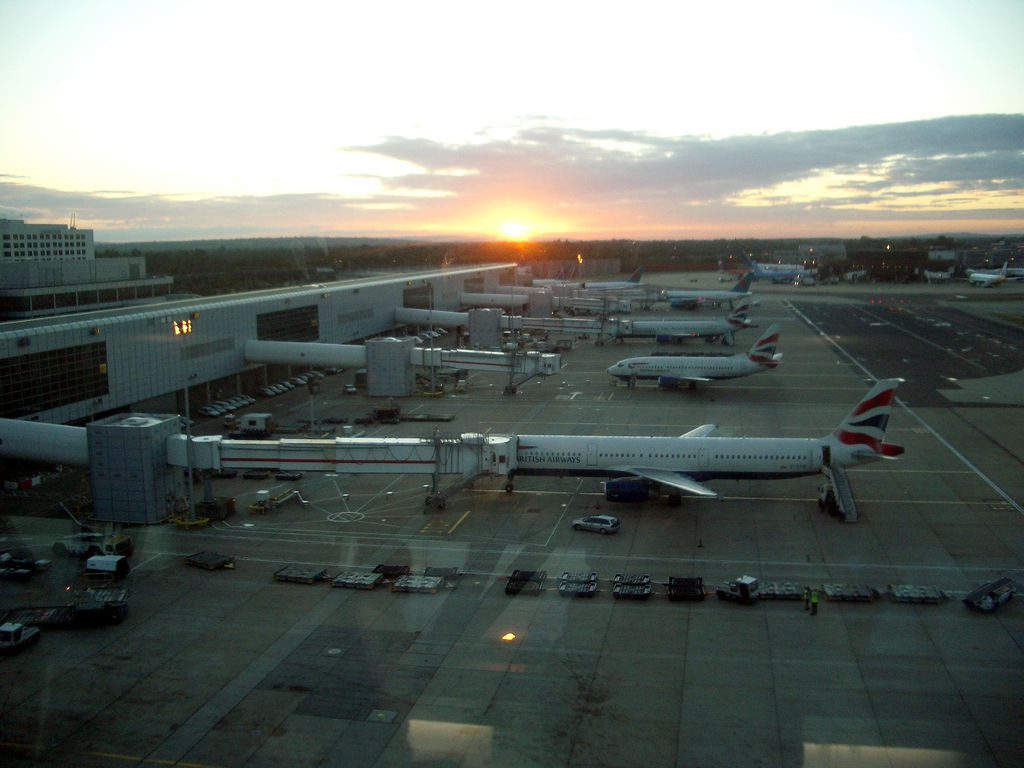 One part of the Jisc Intelligent Campus project is to reflect on the landscape in this space, and one part of that is what is happening elsewhere, in retail, entertainment and transport.

Learning from other sectors and provide useful guidance and inspiration on what is possible and we can evaluate the potential for applying new processes and technologies in an educational context.

Gatwick Airport is the UK’s second largest airport and one of the busiest single runway airports in the world. The two thousand beacons have been installed across Gatwick Airport’s two terminals providing an indoor navigation system that is much more reliable than GPS and that enables augmented reality wayfinding for passengers – a world first for an airport.

The lack of satellite signals makes road-based navigation systems – such as Google or Apple maps – unreliable indoors, so Gatwick has deployed a beacon based positioning system to enable reliable ‘blue dot’ on indoor maps, which in time can be used within a range of mobile airport, airline or third party apps.

The beacon system also enables an augmented reality wayfinding tool – so passengers can be shown directions in the camera view of their mobile device – making it easier for passengers to locate check in areas, departure gates, baggage belts etc.

The new navigation technology is currently being integrated into some of the Gatwick apps and the airport is also in discussion with airlines to enable the indoor positioning and wayfinding tools to also feature on their app services.

No personal data will be collected by Gatwick although generic information on ‘people densities’ in different beacon zones may help to improve airport operations including  queue measurement, streamlining passenger flows and reducing congestion.

Airlines could go further – and with the consent of their passengers – may send reminders on their airline app to late running passengers, for example, or find out where they are and make an informed decision on whether to wait or offload their luggage so the aircraft can take off on time.

Retailers and other third parties may also use the beacon system to detect proximity and send relevant offers or promotional messages, if the passenger has chosen to receive them.

The new technology is part of Gatwick’s £2.5 billion investment programme to transform the airport.

“By providing the infrastructure we’re opening the door for a wide range of tech savvy airport providers, including our airlines and retailers, to launch new real-time services that can help passengers find their way around the airport, avoid missing flights or receive timely offers that might save them money.

“We are proud to be the first airport to deploy augmented reality technology and we hope that our adoption of this facility influences other airports and transport providers so that it eventually becomes the norm.”

The tech stack comes with an indoor map which shows up to date content, positioning with +/-3m accuracy, and navigation technology that is dynamic and recognises, for example, areas currently under construction, or multi floor navigation including when taking lifts, proximity to retailers etc.

You can immediately see the application of such a technological rollout to a college or university campus. As I mentioned in a previous blog post, I said

With the forecast growth of apprenticeships and degree apprenticeships, colleges and universities will find their campuses awash with apprentices who are only on campus for a day a week or for blocks of a week or two. These learners will have the challenge of finding their way round, but not having the luxury of exploring the campus that full-time students often have.

This kind of beacon technology combined with apps from the college or university admin could make life easier for all students (and visitors) who are on campus.

You can also imagine how retail outlets and academic departments, could like the airlines in the Gatwick project could use the technology to provide real-time services (and in the retail space offers) for students.

What are your thoughts on this kind of technological development?

Image Credit: Gatwick Airport, way too early in the morning, by Dan Taylor-Watt, CC BY 2.0