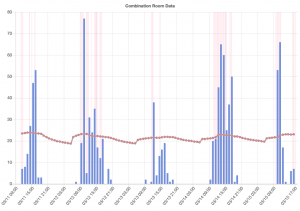 A team from Jisc recently took a visit to one of our Intelligent Campus pilot sites recently, Morley College main campus, situated in central London where Lambeth meets Newington.  With technical expertise, user experience expertise and project management there were quite a number of us!  Also joining us were our two SafeHouse Technology Ltd colleagues who are supplying Morley with senors for data collection.

Morley College is very much focused on the arts and music with dedicated art studios, music practice rooms and a it’s own radio station.  The project team at Morley made us very welcome, beginning our visit with a tour of the building.  The building is an interesting one with original parts dating from the 1930’s combining with 1970’s extensions.  This combination throws up a number of problems regarding room temperatures and acoustics.

The Morley team had given a lot of thought to their requirements and selected a number of rooms with different uses and different concerns from which to gather data. It was good to see the amount of thought and preparation that the team had put into the pilot.  In addition to measuring temperatures and other environmental factors in their selected rooms Morley are also very interested in room use, security of rooms out of usual hours, and inconsistencies between room bookings and actual use.

Following our tour of the site we had a in-depth discussion about data requirements, data sharing and protection, user design and dashboards and planning next steps.  We also talked a lot about bringing the student body on board with the idea of the pilot by emphasising the aims of improving the student experience.  We agreed it was important that the college be transparent about the pilot and the use of sensor so that the student body (and staff) can be reassured of their purpose.

Morley were impressed with the dashboards already produced by Jisc and also had a lot of suggested additional developments that could be made. While initial data gathering will be from sensors in the room the ambition is to combine this data with existing data sets from Morley’s systems for a better understanding of the building use.  Overall there was a great combination of what can realistically be achieved in the short term with more ambitious visions of what the future could hold.

The next steps are to get sensors in place and start gathering and analysing the data to see what insights can be gathered.  Both Jisc and Morley are excited to see what can be learnt and developed through this pilot and how a project like this can improve campus life for staff and students alike.